This photo says it all: 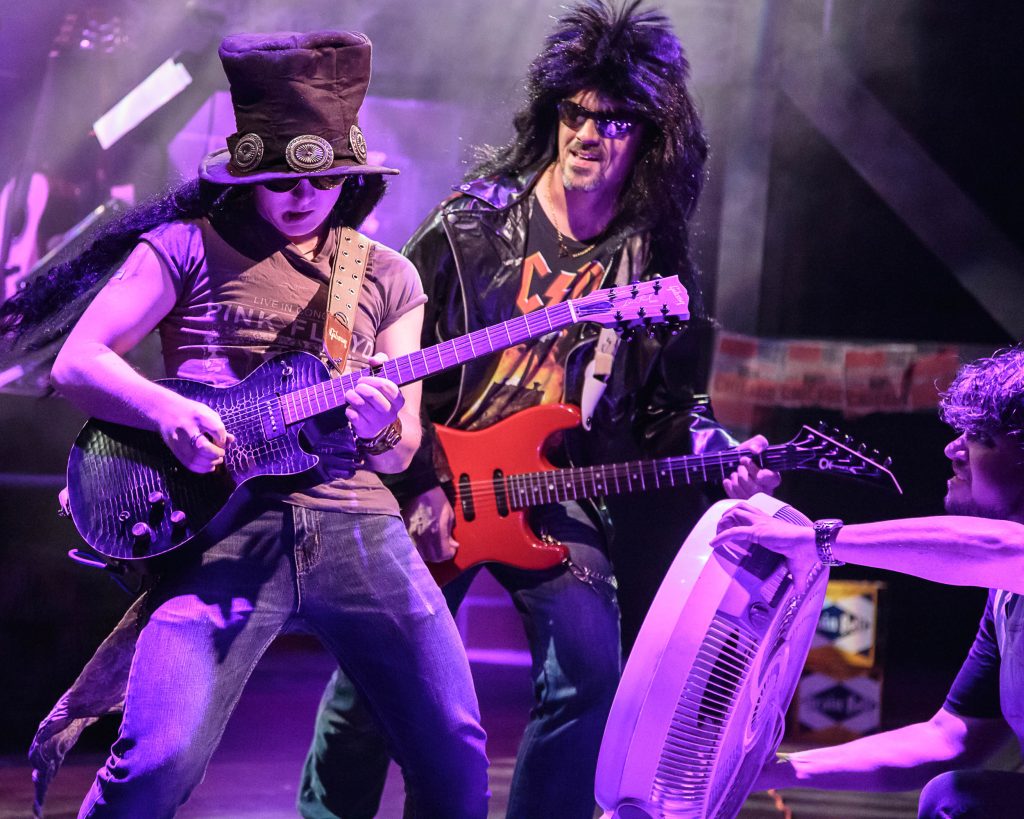 I music directed Rock Of Ages at Rochester Civic Theatre from July-October 2016 (vocal director, music director, led the band during the run). The lead-off song had a ripping guitar solo. This is a picture of the two of us down stage sharing the spotlight, and that exact moment, it was Remi’s turn to shine.

What I love about this is my look of joy and delight (with a hint of “Damn, he’s good!”) watching him in the spotlight. Certainly I could have taken all the “fun solos”, but I love to see those I’m leading SHINE…do what they’re great at and watch…and smile.

I love that smile in the photo. To me it says…

…we are better as a team contributing all our expert skills complimenting each other rather than fighting for the spotlight. I mean, I could have just been focused on my next part, ignoring his contribution…but (at least the photo suggests) I was thoroughly enjoying what this team member was doing and put the spotlight appropriately on him.

…the best team starts with preparation. I started in January practicing myself, getting organized, and spent most of the time building the best team possible…members with skills that outshine my own…that compliment each other…where the players are also nice…fun to be around.

…a great team truly listens to each other. In this show, there were times we acted as a single organism…completely in synch, and when a glitch happened (vocalist or my miscue) the band didn’t miss a beat…we adjusted and locked in without the audience even noticing….most of the time without even looking at each other…just sensing through a guitar lick, a hand wave, or a drum fill, what the next note should be.

…this great team’s suggestions were valued and many times taken.

…I know we spent endless hours rehearsing and preparing but LOOK AT YOU!! You are killing it!!

…when it came to the performance, they followed my lead. My hope was to gain their trust through rehearsal so that by communicating my vision early, taking and executing their suggestions, that by showtime there was zero hesitation or argument about the real-time directions I gave. The result was hard-hitting, locked-in rock-n-roll that showed not only our individual skills, but showed the elevated “one-ness” of the band in the “this sounds amazing and much more than the sum of its parts” kind of band.

Finally, to me, it says, “you are at your best when you focus on helping others succeed, not when you are striving for your own success”. I know, not very ‘career-driven’, but maybe that’s why in IBM-world I am happiest leading a project where the team has a common vision, where the designers and developers looked to me for direction, but (hopefully) know my main purpose is, through delivering an experience customers love, that each designer and developer have a deep ownership that results in a rich sense of satisfaction when their designs and code are the reason that outstanding experience exists in the first place.

With that kind of success…a product they can feel proud of, I think the teams, like the Rock of Ages band, can forever point to that period in their life and instead of remembering the long hours and demands of a selfish leader, instead think, “Remember that experience we delivered!?! They LOVED IT! I was an important part of that team. What a great time of my life and I’d be a part of that team again in a heartbeat”

Greg Hintermeister is an inventor, musician, believer, husband, father, parrothead. His technical expertise can be found across IBM and with many clients; his heart can be found wherever his wife is.